Showing posts from March, 2010
Show all

March 21, 2010
At 0730 hrs, i received a call from Momok... "Fishing Ai Mai? Same old place", he said I sort of rebuffed the earlier invitation as i had just finished my duty and was well... not very sober. Minutes later, i passed by the spot on the bus and saw a familiar presence. That guy was on the way to the spot and that sparked off whatever doubts i had. I got home quickly and got changed... dumping my Nasi Lemak into my haversack. I got a few bottles of drinks from the 711 and i was set. The catch? I was without my rod. You don't do a 24 hour duty and go fishing afterward. It's only human that i was just going there to see the guys in action and maybe have some Kopi later. I arrived by the backdoor and spotted the familiar presence. Both had satisfied looks on their faces like they had just been laid. Roger had that senile yet evil smile which always accompanied him while Momok had that reserved look like something bad was going to happen. After some probing, it was
4 comments
Read more 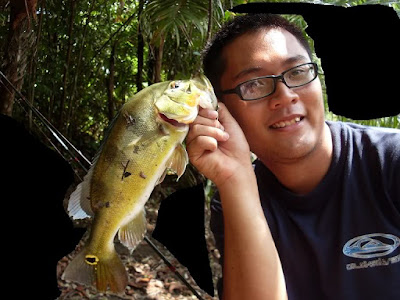 MINI FUN TRIVIA! Can you SPOT THE HELLO KITTY in every pic? The long awaited sky dew came down on a Sunday night as a very deprived dark lord and his minion pondered over their fishing on Monday morning. The dark lord had went to the prawn village but found it hard to take back any slaves. Retribution was due... today. We thought that we would meet early today but Taufik's law struck again but we were still within the golden time. We brushed away fallen branches and galloped to the forbidden spot. The land of the "Ang Mo"... The spot being called the Ang Mo Spot simply because we saw an Ang Mo luring there. There were no foreign talent today but there were definitely fish today. The journey to the spot was quite spectacular as the heavy downpour the night before drove mists and vapor out of the forest onto the water. The misty effected was created and the sun cast a delightful gaze on god's creation. The fishes seem to be very active after last night's r
Post a Comment
Read more 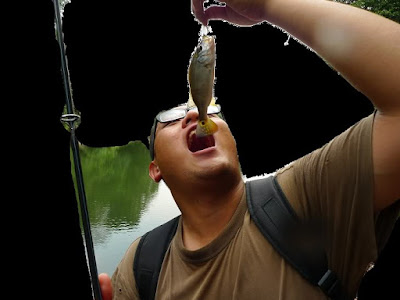 Hi Everyone... I'm finally back to fishing and the past week has not been productive although i had many glimpses of how productive it may return to once the rain starts pouring... I went to the "Ang Mo" spot with Weiyee and we were amazed at how many fishes were rising up at first light. Apparently, they were heading to the open waters to hunt. Temensis and big Tomans were seen moving around. Even the Gouramis were waking up! We casted about our topwaters but nothing was interested except a decent sized toman around the 5kg mark slightly missing my pencil... The fishes moved out of the tributary very fast and we went to another spot. There was a big frenzy going on opposite us but we couldn't reach it. Temensis were hitting on the Toman fries in record numbers. Juvenile Tomans were flying about... After Weiyee went home, i tried flying with Roger and Momok... We were surprised that the shallow water yielded some cute Temensis and Peacocks... We landed quite a fe
Post a Comment
Read more
More posts